Behind The Book with Fraser MacDonald

"Absorbing and stimulating ... a superb book which sheds new light on the conflicts of the mid-twentieth century." — The Scotsman

Los Angeles, 1930s: Everyone knows that rockets are just toys, the stuff of cranks and pulp magazines. Nevertheless, an earnest engineering student named Frank Malina sets out to prove the doubters wrong. With the help of his friend Jack Parsons, a grandiose and occult-obsessed explosives enthusiast, Malina embarks on a journey that takes him from junk yards and desert lots to the heights of the military-industrial complex.

Malina designs the first American rocket to reach space and establishes the Jet Propulsion Laboratory. But trouble soon finds him: the FBI suspects Malina of being a communist. And when some classified documents go missing, will his comrades prove as dependable as his engineering?

Drawing on an astonishing array of untapped sources, including FBI documents and private archives, Escape From Earth tells the inspiring true story of Malina's achievements—and the political fear that's kept them hidden. At its heart, this is an Icarus tale: a real-life fable about the miracle of human ingenuity and the frailty of dreams.

Don't miss Erik Conway, JPL Historian, in what is expected to be a fascinating conversation with author Fraser MacDonald, who will join him live from his home in Edinburgh, Scotland. Special guest appearance by Peter S. Collopy, Caltech Archivist and Head of Archives and Special Collections. 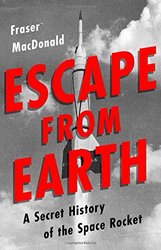 It was while he was doing doctoral research, also at Oxford, and conducting fieldwork in Scotland's Outer Hebrides that he became interested in a Cold War rocket testing range. This, in turn, led to writing about the history of the Corporal missile and its original architect, Frank Malina, and the story of the Jet Propulsion Laboratory. Escape from Earth: A Secret History of the Space Rocket was published in 2019 and shortlisted for the Saltire Society's First Book Award.

In addition to various edited academic books and papers, Fraser's essays and commentary have appeared in The Guardian, The Washington Post, and the London Review of Books.

These days, Fraser is returning to geography, working on a book on the landscape of the Scottish Highlands.

Erik M. Conway is the historian at the Jet Propulsion Laboratory in Pasadena. He is the author of several books. He received his PhD from the University of Minnesota in 1998 with a dissertation on the development of aircraft landing aids.

Most of his work since has been at the intersection of science and technology in the later 20th century, and mostly related to aerospace. His most recent book was Exploration and Engineering: The Jet Propulsion Laboratory and the Quest for Mars, published in 2015. He recently received a Guggenheim Fellowship.

In his book, High-Speed Dreams (2005), Conway argues that U.S. government sponsorship of supersonic commercial transportation systems resulted from Cold War concerns about a loss of technological prowess in the modern world. Realizing the Dream of Flight (2006) consists of eleven essays on individuals prepared in honor of the 100th anniversary of the Wright brothers' first powered flight. Conway also wrote Blind Landings (2007) and is a co-author of the secondary-level education text, Science and Exploration (2007). Atmospheric Science at NASA was published in 2008.

His 2010 book, Merchants of Doubt, was written with geologist, historian and public speaker Naomi Oreskes, as was his article in the Winter 2013 issue of Daedalus, called "The Collapse of Western Civilization: A View from the Future."

Praise for Escape From Earth